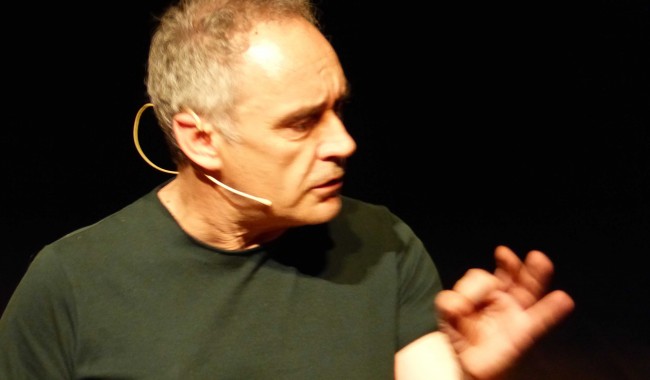 On Saturday May 31st, I had the great opportunity to attend a conference that Chef Ferran Adrià taught as part of TASTE GRECO, a culinary program held at Toledo for its IV Greco Centenary.

The chef Pepe Rodriguez, star Michelin restaurant El Bohio and host of the Tv show “Master Chef”, gave way to the teacher, which he defined as the chef who revolutionized the cuisines of the world, who made things unseen and that has benn called the Picasso and Dali of the kitchen, and why not, says Pepe, it could also be qualified as “El Greco” of the Gastronomy.

Ferran told us that after closing El Bulli, he announced that he wanted to have some sabbatical year, but not at all. This great Chef is a creative machine, his mind cannot stop. In his mind thousands of questions boil he cooks new ideas and projects are born… Him and his team start with the creation of the Bulli Foundation.

Ferran Adria asks himself: What is cooking? When was the kitchen born? He goes further, wants to make an evolutionary analysis of the history of gastronomy, investigate its history. Because in a few years the culinary techniques invented in Spain, many more that have been invented in the last 150 years around the world … Was it a revolution? Where do we go? Where are the roots of our kitchen? Thousand of questions are those that arise.

He also asks what the difference is between art, science and technology. In a world where everything moves so fast and the sights are new technologies, Ferran wants to get to the bottom of this, and applies it to the Internet and Gastronomy. His dream, his own words, is: “that information and knowledge gets in order and everything is easier for the user.”

I’m reading my own post, and I find it all a bit confusing, but I am simply writting down some of his own words… but weren,t his recipes complicated, novel, complex, witty, and amazing?? So are his plans.

So I leave the link of his website so that you can complete the vision and understanding of his projects: http://www.elbullifoundation.org

I end my post thanking Ferran Adrià for sharing with us his ideas and thanking Greco 2014 The Foundation for organizing it and inviting us.