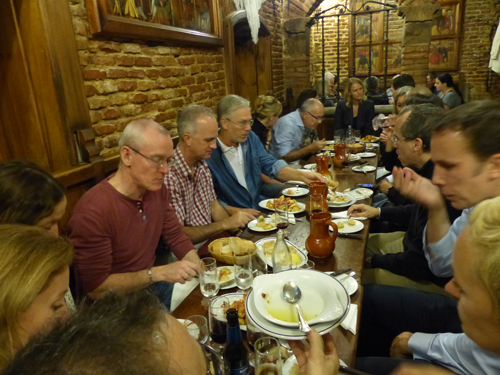 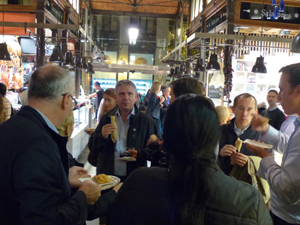 From the beautiful Plaza Mayor (XVII century), full of gorgeous bars and taverns and one of the most famous tapas quarter, an official guide lead them on a private walk through some interesting sites which currently form part of what is known as the Madrid of the “Hapsburgs” (name of one of the Spanish Royal family in our history).

After they went for “de tapeo”: Snacking and drinking your way through the evening from bar to bar is incredibly Spanish, and can be lots of fun. Grabbing a tapa, a small portion of food or sharing a “ración” and drink a” caña” (small beer) or a glass of wine one place, just leads to someone saying “ let´s go to that place down the street,” where they might offer a different or better tapa.

Did you know that Madrid is the city with more taverns in the world? More than 25.ooo ¡¡¡

They say that in the Middle Ages taverns were already one of the Most prosperous businesses in Madrid. These became popular around the 11th century. The people enjoyed the wine which was served there. Beer , on the other hand, took longer to wine their confidence and, despite having been introduced in Span in the 16th century during the reign of Charles I of Spain and V of Germany, did not find its place until well into the 19th century. 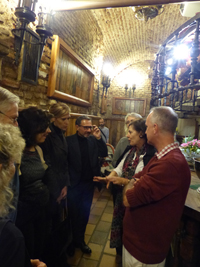 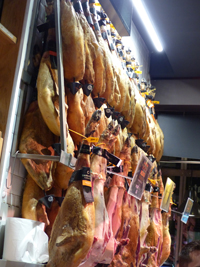 In the typical old taverns, wine was served in casks. Wine was kept in barrels and was served in a frasca – a glass container with a square base and a small neck – and poured into a special low and wide glass called chato or chatito (meaning “flat and small” in Spanish). Little by little, this custom was changing until now that wine is served in a bottle and a wineglass. The red doors were a symbol that invited people to enter to consume only wine; costumers could bring their own food and they used to meet in the taverns to socialize.

But with the passing of time the term “ taberna” has undergone changes in it usage. In the strictest sense, they were places exclusively dedicated to the sale of wine, whilst the other popular places, which served a single dish of the day, where known as “mesones”.

It is said that King Alfonso X ” The Wise ” ordered that the inns should not serve wine if it was not accompanied by some food, to avoid getting drunk quick. The portion of food served on a plate was placed over the glass or jar to “cover ” the container (hence the origin of the word ) and thus prevent any fly or some other flying attacker slinks in the coveted beverage .

Aside from these were the inns , bars, cafés and restaurants. Nowadays these concepts have increasingly merged.