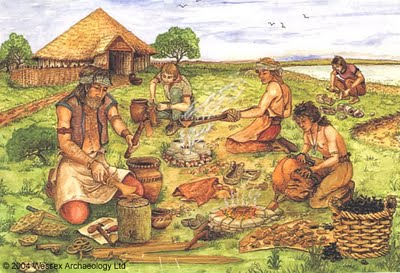 Due to the succession of cultures that have inhabited the Iberian Peninsula ( Spain), we have a huge variety regarding to: music, art, language and how could it be less, gastronomy.

Spain’s geographical position has made our gastronomy, rich with the variety fo products our land offers. One such case is fish, being a peninsula and therefore be almost completely surrounded by water, this food has 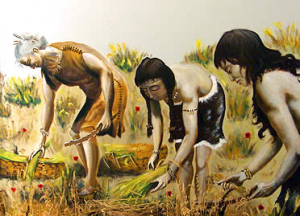 been consumed by fishing from very ancient times. Thanks to the large expanse of valleys and rivers that filter the water in order to sustain irrigation, we can have multiplicity of vegetables and fresh fruit in every season. Or the renowned Spanish hams, which are cured in the mountains of the peninsula.

Since the settlement of colonizations Phoenician, Greek and Carthaginian until our times, the Spanish gastronomy has constantly evolved over the centuries.

The Phoenicians and Greeks spread the cultivation of vines, wheat and barley and thus began producing wine, bread and beer (which in those time was a kind of barley juice) as they saw the need to output surplus grain that was not consumed, .. the Romans followed in his footsteps .Up the s.II BC, Roman cuisine was based on simple foods: peas, sheep’s milk cheese, lamb, cabbage , fruit. But A.C. early second century, the Romans came into Asia Minor and discovered the refinement of the Greek courts. From that moment, preparing meals began to be more expensive. Cooks, work performed by slaves, began to be paid more.

As the years passed, men discovered new foods, ways of conservation and ways to consume it. Eating went from being a daily necessity, to be an emotion of palates, since the Romans performed feasts and banquets in honor of the food. They were seeking for new animals, unusual blends and drinks to arouse the interests of the first gourmets.

Although undoubtedly it was the Arabs, who began to leave a more important impact on Spain gastronomy. The introduced light seasonings and spices applied to different dishes, they began to combine fruit or nuts in dishes of fish or meat, creating other flavors meals.

Saffron; citrus fruits such as oranges, lemons or grapefruits, vegetables like eggplants, artichokes or rice; watermelons; melons; pistachios and dates are some of the many culinary contributions that allowed us to today.

Years later, with the formation of Christian kingdoms , Spaniards began to prepare dishes with pork, since for both Jews and Muslims this food was forbidden. Christians, made full use of the animal, did not stem from any other, parts of the pig that did not like the rich, feed the poor.

To this must be added, some of the eating habits that we maintain to this day, for example, preparing special dishes for Lent (no other animal flesh that was not the fish) or the invention of French toast. “Torrijas”

1492 was a year that changed the peninsula in many ways, it was not only the victory of the Reconquista, but about the cuisine of the country, which gave a huge turn after discovering the new continent: America and therefore , the conquerers brought to Spain , a variety of products, spices and new ways to elaborate recipes. Gradually, they were integrated to our Spanish diet products such as potatoes, tomatoes, vanilla, pepper, oats, beans or chocolate. Many of them, indispensable products in our dishes today, such as potato omelette, lentils with chorizo, typical Asturian bean stew or chocolate with churros.