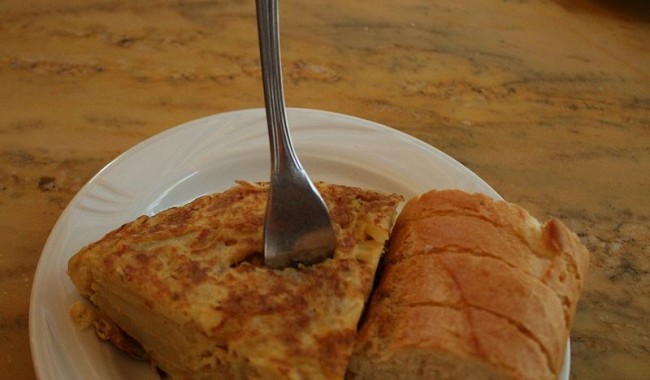 Each country has its customs and habits with regard to social life, religion, schedules or just meals. Here we present many of the customs that we have in Spain regarding to meals:

Breakfast of a typical day usually consists of a cup of coffee with a toast or some buiscuits. Unlike American breakfast, Spaniards usually take less food and about midday we have a snack , such us a “pincho de tortilla” a portion of spanish potato omelet or , churros a toast with coffee, specially people working that gets free time to get out of the office to have a quick rest.

Lunch is the main meal of the day, which is usually done between 2 and 4 pm. It is the most abundant meale we eat all day. The first course is usually the lightest meal consisting of a salad, mashed or soup while the second dish, usually meat or fish. For dessert, usually a piece of fruit, yogurts, puddings, custards …

We end the day with the Spanish dinner, much less abundant than lunch. Usually in Spain it is a late dinner, between 9-10:30 pm. Typically, a bowl of salad, assorted tapas, vegetable or a steak or fish with some seasoning. 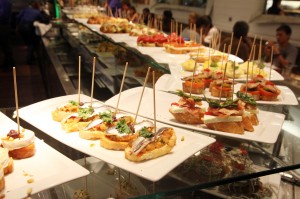 If Spain is characterized by something worldwide, it certainly is for their successful custom of going out to have some tapas from bar to bar. These small portions of food accompanied by beer, wine or cider and that are the perfect excuse to meet friends to have an “aperitif” before lunch or dinner on the weekends.

Very typical in Spain, after lunch, the Spaniards usually take their time at the table for a short time, enjoying the company and a good conversation, and taking a coffee, tea, a digestive drink or for the more daring, a “copa or cubata”:a combined drink of soft drinks with alcoholic ones.

–Drinks Typical on the table 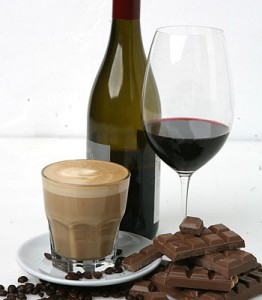 The wine is very common drink at meals, whether in a restaurant or at home with families, it is the perfect drink to accompany a meal, besides being healthy drink a glass a day, according to several studies.

Coffee, almost indispensable complement in the life of the Spaniards. 63% of the Spanish population older than 15 years old take at least one cup a day. Not only is drunk at breakfast, also after dessert or just during a breaks in work or have a chat among friends.

In Spain, it is a deliberate action, performed in restaurants after paying the bill, leaving a tip for good complimentary services performed between 5-10%.