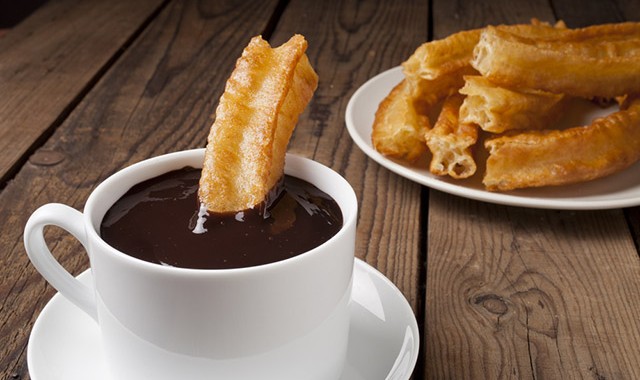 With this post and the followings, we are going to give you a wide information about the variety of Spanish cuisines that we have all over our country. We will explain and describe each one, telling about its history, its denomination of origin products and typical dishes. It is very important to understand, that due to our history and therefore, all the invasions and civilitations we had in Spain, we have many influences in our dishes and way of cooking from Arabs, Romans , visigodos… It is amazing’¡¡

We will start with Madrid Cuisine main dishes and denominations of origin. The Community of Madrid is an autonomous community located in the center of the Iberian Peninsula and therefore in the center of the central plateau. Segovia bounded on the north, east to Guadalajara, south to Toledo and Cuenca and west with Ávila. It is uniprovincial, the capital Madrid, is also the capital of Spain.

The relief of Madrid is diverse, but can be summarized in two main sets: the mountains and the plains of the Tagus Valley, perhaps this privileged location enjoys most ecosystems allowing you to produce a lot of food .
It has a varied cuisine ranging from traditional cuisine to the most modern cuisine. From exquisite passing cooked or roasted vegetables and fruits to a modern kitchen in miniature.

Perhaps we should go back to the time of Philip II when we started talking about this food, because thanks to this king becomes known and popular when he makes this community the capital. At that time, massively migrants came from the most diverse Spanish regions brought their eating habits.

Its base is Castilian cuisine, which is typical for its culture and the common origin of the other provinces of Castilla. At this time probably it began popular style inn that today still remains in Madrid’s cooking, frying gallinejeras on the street and 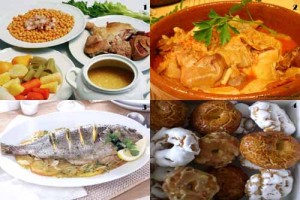 canteens serving wines. Some of the trattorias of today date back to the eighteenth century: for example Booty House, Castilian rancid flavor, was established as an inn already in the año1725, or the Posada de la Villa, dating back to 1642.

However today recipes commonly accepted as typical Madrid are: Cocido Madrileño (formerly rotten pot) or chickpea stew and other vegetable stews, tripe Madrileña, made with tripe cow, Sopa de Ajo, omelette or Spanish omelette and delicious recipes of lamb or beef. All this, making good use of fresh vegetables, among which are asparagus of Aranjuez, of extraordinary quality and delicious taste.

However, although it is paradoxical considering its geographical location, its cuisine fish found here in quantity and exceptional quality abound. It is no 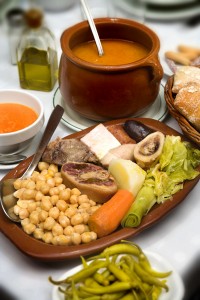 coincidence since the city hosts the second central fish market in the world, after Tokyo. Among its most traditional recipes include baked sea bream and cod. However it does not stay without tasting the fantastic variety of seafood prepared with recipes of all Spanish geography and international cuisine can be found here.

And nothing more Madrid to accompany a dinner with a recent designation of origin; “Vinos de Madrid“, young, fruity and aromatic in their versions of red, pink and white. And even more castizo will finish with more traditional distillates; Chinchón anisette.

Among his candy stand out for tipismo the “Holy Roscos” eaten by San Isidro, patron of the city, we must also highlight the importance of Aranjuez strawberries or melons of Villaconejos. But apart from these fruits, the community enjoys a number of typical sweets usually come into play during the holidays. Thus, French toast, sweet par excellence, usually taken at Easter; donuts, which are filled with cream, chocolate, cream and bones of a saint, are typical of the Day of the Dead ..

We can not talk of gastronomy without mentioning the many food markets have provided once the inhabitants of the city: the Mercado de San Miguel, the Barley, the Barceló, et cetera. The appearance in 1982 of Mercamadrid has made the capital one of the points of supply of vegetables and fish largest in Europe. Along with the supply of these large areas of grocery stores, grocery stores have been providing specialized form food products Madrid.

DESIGNATIONS OF ORIGIN OF MADRID

The Madrid region has an important agro-alimentary supply, legally recognized in the following designations of origin:

Not distinguished with distinctive geographic feature, but not exempt from the same quality as the previous ones. Other locals foods enjoy a deserved reputation inside and outside the region. It is products like Villaconejos melons, strawberries and asparagus from Aranjuez, the beans from the Sierra Norte or garlic from Chinchón.

MAIN DISHES OF THE TRADITIONAL CUISINE FROM MADRID

Among the excellent local products, we get a different variety of dishes, which any visitor can not leave Madrid without first try due to its popularity, such as: